Getting Over a Car Accident: Money Lessons from My Crash

Getting Over a Car Accident: Money Lessons from My Crash

I was hit head on by a driver who made a U-turn on the freeway while driving at the speed of 65 miles per hour. So how did that happen?

The driver hit my car first, which caused me to hit another car before mine came to a stop when my entire car hit the center divider.

In any case, the driver who lost control ended up hitting two other cars, and since one of them had a passenger, there were four victims in this accident including myself.

Even though my automobile was a total wreck, I’m glad everyone involved was ok and not seriously hurt.

Forced to Purchase Another Vehicle with My Own Money

Upon finding out from the body shop that my car was totaled, my first reaction was to get a rental car while I wait for the insurance companies to sort it out and send me a check to get another vehicle. After all, it does state on my insurance contract I have rental coverage for 30 days.

This doesn’t sound fair at all by any stretch, but what’s really upsetting is that since my car was a lease, I had to deplete my savings account by $3500 as a down payment for another lease.

What if I didn’t have any extra funds in my account? Would I have to start walking or taking public transportation everywhere I go while I wait for the settlement for an indefinite period?

Not that there is anything wrong with walking or taking public transportation, but it is a bit inconvenient when I often must rely on driving to perform my job duties at work.

Pay Out of Pocket for Medical Care

My financial woes don’t end there. Having been injured, now I must seek medical care. My first thought was to see a Doctor who works on contingency which means they will be paid out from my settlement once the case is settled.

The problem with that is, the medical provider wanted me to sign a contract stating that if the amount of the settlement isn’t enough to pay the final amount of my medical expenses, I will personally be liable to pay the difference. Now that to me, just sounds like financial suicide.

With no other option, I use my own medical insurance to obtain the needed physical therapy. My therapy lasted for about two months. Once my treatment was over, within a few weeks, I received my first medical bill.

At this point, my case was no closer to getting settled so I called the patient support line on the bill to let them know that my case is still pending and eventually, I will be able to pay them once the case settled.

To my surprise, the representative on the other end advised me that I should begin paying the bill as soon as possible. Otherwise, it will get sent to collections and ultimately ruin my credit I’ve worked so hard to build up all these years. Of course, without hesitation, I made a payment arrangement to pay in monthly installments out of my own pocket.

As you can see, just because you may be the victim in an accident, this does not mean you will be financially taken care of. Not only did I have to pay out of my own pocket for a down payment on another car, I had to first start paying for my own medical bills, all before even settling the case.

Once the case settled, which was close to a year later, the monetary portion I received was so minimal, it did not justify all the pain and suffering I endured throughout this ordeal. Therefore, I made a claim to collect on my underinsured motorist coverage.

The Truth About Underinsured Motorist Coverage

Keep in mind that I am only able to make a claim on my underinsured motorist coverage if my coverage is higher than the liability amount that I received from the insurance company of the at-fault driver. Let’s say for example, the at-fault driver has only the minimum liability coverage in the state of California of $15,000 per person and $30,000 per accident.

Since there are four people who are entitled to split the $30,000, I can only claim the difference of what I’m covered for, minus the amount I already received. Let’s just say I only received $9,000 for the liability claim; remember, one-third of that goes to the attorney so my portion is only $6,000.

Now, if I only purchased underinsured motorist coverage of $15,000, then the maximum I will be entitled to, if the insurance company agrees, is $6,000 ($15,000-$9,000). Again, one-third goes to the attorney, so I will only end up with $4,000 if my auto insurance company even agree that I deserve extra compensation for my pain and suffering.

I’m not planning to use it anytime soon, but life is a moving target and no matter how careful you may be, accidents can happen at any time. So, make sure you trust your auto insurance provider. I really like Metromile as an affordable provider for me because I do not commute very far anymore.

Having at least nine-months-worth of emergency funds in your savings account for those one-off situations is crucial for yourself and the well-being of your family. You never know what type of punches life can throw at you but being financially prepared can at least soften the blow.

If you find yourself in a situation where your savings is not enough, you can also consider a small personal loan. This will allow you to spread out the expense. Also, there are several online lenders that can support you, such as Zippyloans. I recommend not borrowing more than you need, but it can help you survive until insurance companies reimburse you.

Thanks for subscribing! Please check your email for further instructions.

Something went wrong. Please check your entries and try again. 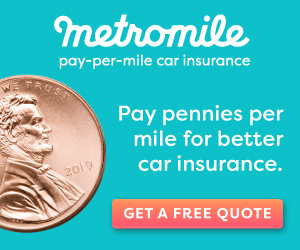